No Result
View All Result

Mirza Shahab-ud-din Baig Muhammad Khan Khurramm, known as Shah Jahan, looks to the horizon. Since 1658, he has been living under house arrest, ordered by his own son, in the Red Fort of Agra. From his penthouse tower, all he can see is one thing: his wife.

A few days later, Shah Jahan would pass away and could finally rest next to his wife, Mumtaz Mahal, in the magnificent mausoleum built in her honor: The Taj Mahal.

Agra 1631:
Arjumand Banu Begum is giving birth the fourteenth son of the muslim emperor of the Mughal Empire: Shah Jahan («King of the World»). Arjumand, better known as Mumtaz Mahal («Chosen One of the Palace»), is the favourite of the three queens from Shah Jahan. She has been always at his side, supporting him during the succession fights with his brothers.

Four years after succeeding to the throne, they live happily in a prosperous and, for the time being, politically stable empire. The Mughal Empire, extended since 1526 over nearly all the Indian subcontinent and part of Afghanistan, shines architectonically under the rule of Shah Jahan, while returning to a strict interpretation of Islam. Hindu temples have no chance with him…

But Mrs. Destiny, as always, had her own plans: Mumtaz Mahal would die in her last childbirth and Shah Jahan, plunged into sadnesss, would order the building of a mausoleum complex, across the Yamuna river from his own royal palace at Agra, to bury the body of his beloved wife.

The mausoleum was constructed completely in white marble inlaid with semi-precious stones by more than 20000 workers and 1000 elephants coming from all over India, Persia and the Ottoman Empire (Turkey). Two decades later, the most magnificent mausoleum in the world was ready to receive Mumtaz Mahal: The Taj Mahal.

This españolito is entering the Taj Mahl at 5:30am. Although my relationship with India is not at its best -actually it is at its worst-, I want to use the opportunity of being in Agra to see the sunrise at one of the most beautiful buildings in the world. The story behind the building amazes me, but I must admit that I am so much looking forward to leaving this country, that I am basically planning to go to the Taj Mahal, say hundred times «no thanks», take the picture and leave.

– «Dile a ese chico que se aparte de ahí» (say to that guy to move away). I hear in perfect Spanish how a guy wants me to step out of his picture. I move some meters away and continue my early morning walk through the gardens of the building. With those guys, to whom I was trying to destroy the picture, I would finally spend almost three hours walking and laughing together around the Taj Mahal. It is so funny to fight with the rest of the population to get the best picture of the Taj Mahal. I do not know if they will be reading this surreal blog, but anyway, thank you both for adopting me during those hours. It is just great meeting nice people anywhere in the world.

Taj Mahal: unexpectedly a really fun morning, and definitely a magic place: a teardrop on the cheek of time («Tagore»). 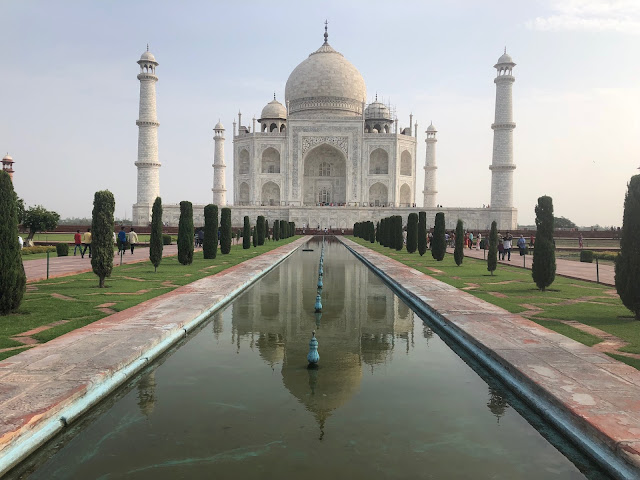 During the third and last phase of the project —the tunnel— and before seeing the greenish yellow-blue-orange light, let us...

The light at the end of the tunnel

Hello my dears, Yes, there is light at the end of the tunnel: a kind of yellow-blue-orange laser point getting...

That's all, my dearest surreal readers! Almost fourty days later, there I was, seated on a plane heading to the same...

4:00am:  A bus full of colourful people departures from Tel Aviv heading to Eilat, 350km south from Tel Aviv, to...

“Would it not be easier to respect each other, live and let live? After all, all religions believe in one...

The world upside-down: Welcome to Tel Aviv! This is exactly how I feel, upside down, while running happily along the...

First of all, thank YOU for being there right now reading these lines. Without knowing each other —or maybe we do know each other— here we are at this moment of time sharing a piece of our respective lives.

Our sub-conscience —although I tend to believe that our conscience rules everything— found a reason for me to write these lines and for you to read them. Honestly speaking, I would love to understand that reason, yours and mine, but I will of course respect it if you don’t want to share it: fun, curiosity, help, laughs, sadness, solidarity, just-passing-by moment... Whatever the reason is, you are most welcome.

And now that we know why we are here —do we?— let us focus on the fact that our paths just crossed, at least emotionally, and let us enjoy this time together. Our paths will continue crossing as long as you, my dearest surreal reader, and me want to. From my side, I can tell you already that, after a quite intense roller-coaster period of time, I am determined to keep writing these lines only Lola knows for how long….

You might be asking yourselves what my reason is for having and sharing this surreal blog. I can’t answer that question today —not sure if I know the answer— but I am sure that one day I will find out and then, of course, I will share it with you. Until then, there is only one way: always forward and with a smile.

To make it short, I am just a little spaniard lost in the world, who one day —already eight years ago— left his country following a dream. That dream took me first to a small village in the middle of nowhere, or more exactly in the middle of East Germany, where I had a fascinating and absolutely recommendable experience. The years went by and my dream pushed me again, not without overcoming a few -> some -> many giving-up moments, to one of the coolest cities in the middle of Germany.

And there I am right now, with an absolute mismatch between dream and let-us-go-back-to-Spain feeling, writing down these lines for you guys, my dearest surreal readers, and I guess also for myself: What was my dream?

Anyway, happy to be back and happy to feel you there on the other side of the screen.

So, this is me: “Espaniolito perdido in the world”.

Do you want to get notified when a new post is born?

The light at the end of the tunnel

No Result
View All Result